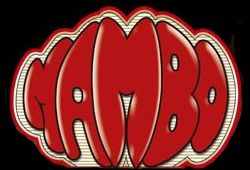 The Mambo Club in Budapest is a nightclub located on the bottom of Gellert Hill, so among the list of nightclubs in Budapest I have written about it is the only one that is on Buda side. Mambo is according to their own information the oldest nightclub in Budapest. The club itself is on 2 floors including seperated dancing areas, VIP room and all you need to enjoy a night out with beautiful Hungarian girls dancing for you.

A look on the price list of the drinks shows approximately the same price structure as in many other clubs so you pay around 6€ for your beer which is absolute average in Budapest. The entrance for Mambo nightclub in Budapest is free and the opening ours are from 22 – 5 every day. The girls offer whipped cream, ice cube, candle and lesbian shows on stage for your entertainment. Of course, just as any other club in Budapest Mambo is oraganizing Stag parties as well offering a super show for your stag.

I have never been to Mambo Nightclub in Budapest so I cannot say anything about private dance prices or about the girls and also the service. But according to the website the girls look really nice and sexy. So if you want to enjoy a nightclub on Buda side have a sneak into Mambo nightclub.

Essential Tips for your Stay: